The production time depends on the film’s duration, its complexity, the flow of works, communication between both parties (or three parties if an Agency also takes part in the discussion), work load, etc.

Regardless of the deadline the process of explainer video production stays the same and it’s divided into 8 steps. 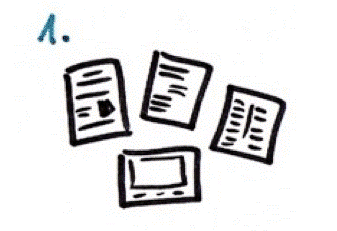 We initiate the process of making a film with precisely that. We need to understand the subject of your video inside-out. Therefore the client presents his or her vision (thanks to questions included in our Brief questions), and we learn what are the specifics of the client’s business.

After Brief we collect materials from the client. Typically: PowerPoint Presentations, flyers, website links etc. All the things that help us understand the subject of your video. 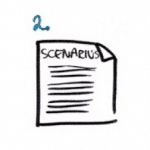 A well written scenario constitutes the key for creating a great explainer video.

Basing on information collected from the client we create an initial scenario outline. Due to the fact that we are from the outside we can notice those elements which are especially important for potential recipients. Remember that recipients usually do not possess such knowledge concerning the company as its employees, so it has to be presented to them in a clear manner.

When we agree with the client what should be presented on the factual level, our copywriters translate that message into an attractive story. Meaning de facto – the film’s scenario.

The scenario usually takes on the form of a story, which helps to keep the viewers’ attention. It’s consistent with the client’s guidelines regarding the movie’s style, characters, brand’s image etc. Next we send the scenario to the client who makes any potential corrections. After accepting the proposed contents we the scenario goes to the proofreader or native speaker who checks if there are any mistakes.

If everything is okay we proceed to the next stage of producing an explainer video.

Summing up, the scenario constitutes the voice/factual content (what we will hear in the film). And to a large extent it determines the final duration of the video. Our calculations show that usually there are circa 90-100 words in English  for every minute of the video.

There is of course the possibility to include the entire scenario and film in the company’s wider marketing strategy. Then we take advantage of the client’s guidelines concerning the style in which the film should be made, what slogans to use, who is the main character, etc.

An often used, and recommended by us, model on which we base when making most of our films is the model of a character’s journey, used in most ancient myths and modern motion pictures, meaning: 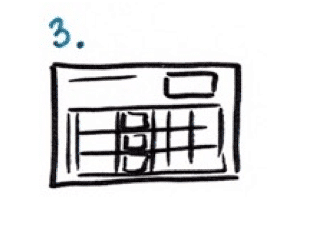 At this stage the first real “outline” of the film is created because a storyboard constitutes a document which allows us to see how the movie is going to look like, frame by frame.

A storyboard includes specific phrases from the scenario accompanied by images. The scenario is divided into specific scenes with assigned images of particular film frames, voice over text, used props, and remarks concerning production and editing. Below you can find example elements from storyboards, which we’ve really used when making films for our clients: 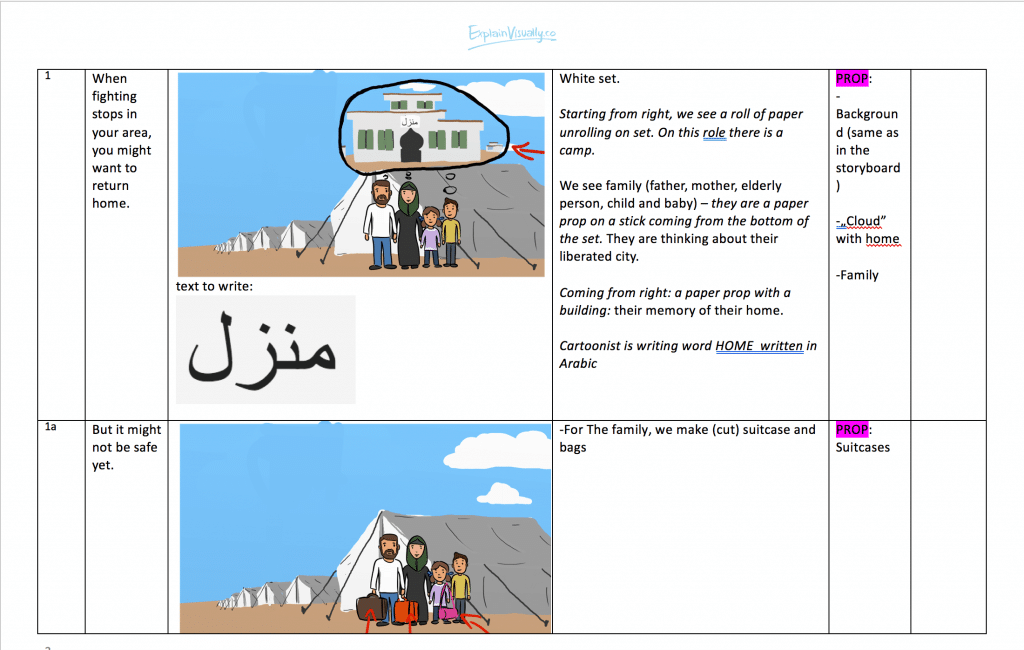 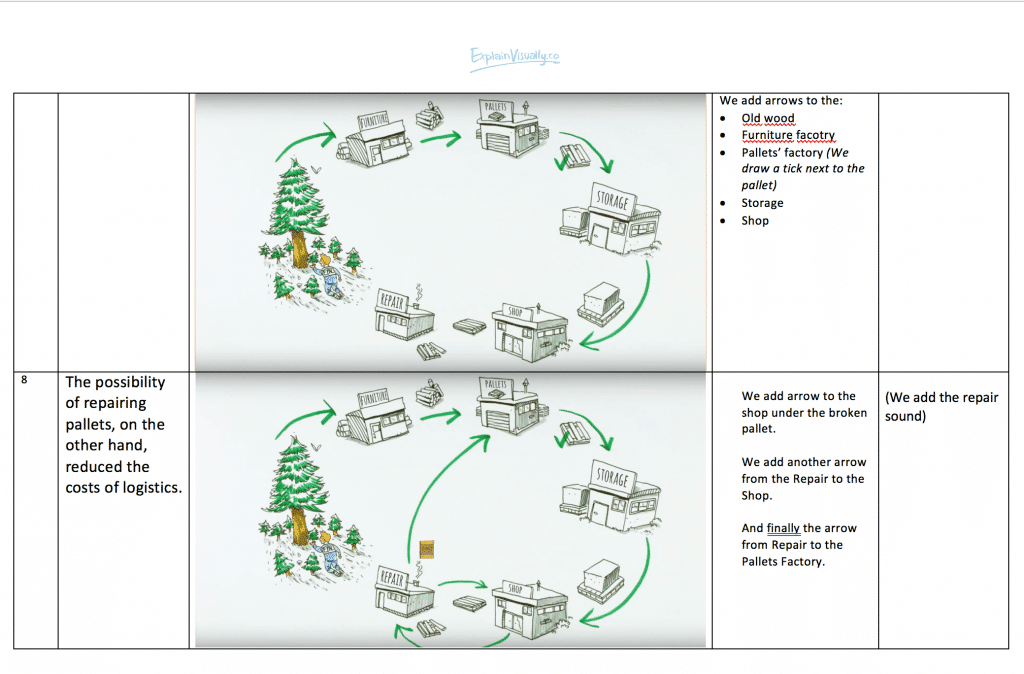 At this stage we usually select the professional voice actor who is going to grasp the viewer’s attention and evoke the right emotions. We apply the voice, tempo and acting to the movie’s subject and goals. We can provide voice-overs in most of the world’s languages. 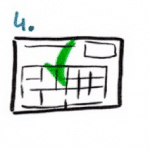 This is the most important element in the entire process of film production. Why? Our films are created “live” (are shot on a real film set at our studio) just as real motion pictures.

Just imagine that for example after shooting an entire sequence of scenes, when the production manager sees the recorded material he states “You know what, let’s have one man in this scene and not two, and include fourteen women (including one Chinese woman), shoot it not from above but from the point of view of a frog, and we should really shoot the scene in London at dawn and not at dusk in Berlin”…

In practice, this would mean that everything has to be recorded once again… Nothing can be “fixed”. So actors (who are often already handling other businesses)  have to be called again, or perhaps a completely new casting must be held once more, props must be prepared, a new letter to the City Hall regarding using public space must be written…

The case is similar when it comes to our films. The illustrator has recorded the film, leaves the set, and the film goes to editing. Any changes require to call for the illustrator and engage the editor.

Changes made after accepting the storyboard result both in an increase of costs as well as extending the production time. 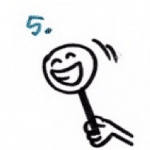 When we already know what are we making and how, then the props are prepared – both paper ones, handmade by us, as well as the “real” ones which have to be found and purchased in accordance with the storyboard.

Cartoonist looks for the best way to transform the storyboard’s plot into a great movie. Apart from the props he is i.a. making first sketches, testing sizes of the pictures, choosing the appropriate colours from over 200 markers. 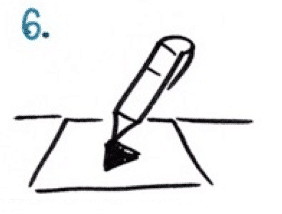 We usually reserve 2-5 working days for the film set.

The films are recorded in high quality with an HD camera. The illustrator can take advantage of more than 200 marker colors and countless numbers of paper materials. Furthermore, the illustrator is also supported by the production manager who helps to execute the more complex scenes. 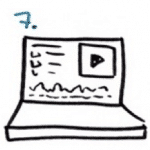 Editing always starts with correcting colors during which we make the recorded colors as close to natural ones as possible.

Then the video material is cut into portions with their speed increased at more than ten times. Any unnecessary hand movements and failed scenes are being deleted. One minute of recording is usually “composed” of a few hundred short fragments.

The pace and duration of each one is synchronized by hand with the words spoken by the voice actor in order for the image and writing to perfectly correspond with the voice over. That is why editing one minute of video usually takes a few hours of constant work.

Any special effects or stop motion animations, which cannot be done using traditional methods, are created and added during the editing. 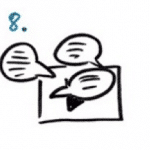 It happens very rarely that there aren’t any.

They are usually limited to minor changes in the pace of particular scenes. If the changes exceed the previously agreed scenario and storyboard then we have to record the scenes anew, which rarely allows to meet the initial deadline and budget.

That is why point 4, accepting the storyboard, is so important.

The process described above may seem complex. However we take that entire load on our shoulders because we execute films from start to finish. The client usually provides us only with feedback at the scenario and storyboard stages, so that we are certain that the film is going to look the way it has to.